A Few Words About My Dad

In his 20-year N.F.L. career, Junior Seau established himself as one of the game’s greatest linebackers. He committed suicide in 2012 at age 43 and was subsequently found to have had a degenerative brain condition linked to repeated hits to the head. Before his death, Seau told his daughter Sydney that she should speak on his behalf if he made it into the Pro Football Hall of Fame. But the Hall, citing a five-year-old policy of not letting others give full speeches for deceased inductees, did not allow Sydney to deliver her speech. 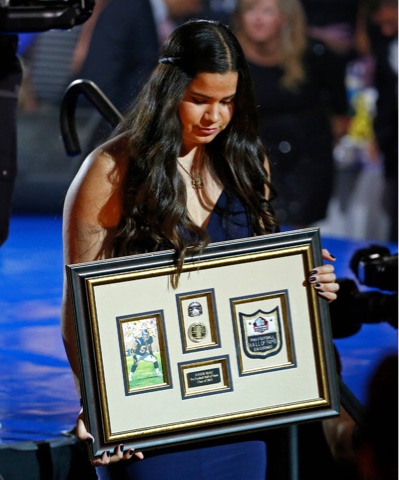 First off, I would like to thank the generous people of Canton, Ohio, for opening up their homes for this event, the Pro Football Hall of Fame committee for voting my father into the Hall, and of course the other seven deserving inductees.

Before I start thanking communities, teams, family and friends that I do know and many others that I have yet to have the pleasure of getting to know, I would like to say that this is not my speech to give. This speech was meant for a man that worked 20 years within the sport he loved most in this world.

I cannot speak for him because I am not him. I have not played in the N.F.L. for one second, let alone 20 years; I do not have past seasons to reminisce about or hilarious locker room stories to joke about. But I do have one thing, and that is unconditional love.

Your Junior Seau, your No. 55 and your buddy, was also my father. And although I didn’t know every aspect of his life, I did know one particular part very well. His athleticism and talent made him extraordinary enough to make it into the Hall, but it is his passion and heart that make him truly legendary and deserving of this tremendous honor. Tonight I would like to honor him and his legendary heart.

Read more »
Posted by Sam Bailey Leadership at 7:08 AM No comments: